Rogaška Slatina is now much more than just a healthy retreat. It has developed into a very diverse town, combining old traditions with contemporary modern twists. 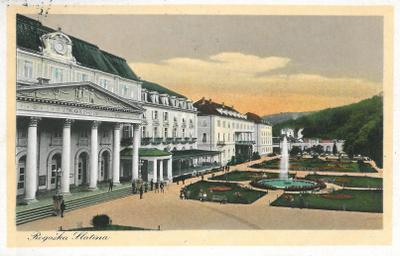 Rogaška Slatina is now much more than just a health retreat. It has developed into a diverse town, which combines tradition with lively, contemporary modern touches.
Rogaška Slatina is famous for its centuries old traditions, indicated by excavations and a Roman road which led from Lemberg, passing through Rogatec to Celeia and Petovia – signs that the area was known by the Celts and Romans. From 1803 it started its development from a small village to a modern health resort. In the 19th and early 20th Century, the first hotels were built, namely the Home of Health (now the Grand Hotel) and the main health hall (today’s Crystal Hall).
All the hotels were renovated in 2003 with modern touches and comforts, but they still retain their historic airs. Rogaška Slatina is known for being visited by various Royal families (Habsburg, Bonaparte, Hohenzollern, Bourbon, Obrenović, Karađorđević), aristocracies (Turn und Taxis, Della Grazia, Furstenberg, Windischgraetz, Liechtenstein) and by a host of other important guests (the writer Ber-ta von Suttner and musician Franz Liszt both spent time here).

Hidden and nestled in a green valley, and offering the famous Donat healing mineral water and a mild climate, Rogaška Slatina has always offered its visitors relaxation, peace and well-being. The water’s reputation for healing derives from a report of 1665, which details the recovery of a powerful feudal lord, Peter Zrinski, after he drank it.

The secret of Donat water is its uniquely high magnesium content, which helps cure and prevent metabolic diseases. The healing power of the water is also used at renowned Health centres in the area, which offer alongside it various modern diagnostic and curative programmes.
Today, Rogaška Slatina is an attractive and ideal destination for those seeking health, well-being and peace. The resort is surrounded by beautiful nature and a rich cultural life, which provide tranquillity and restoration. People also visit to meet others and make new acquaintances; visitors are brought together by a shared desire for self-improvement and relaxation.

You can find out more about which cookies we are using or switch them off in settings.

This website uses cookies to give you the best possible user experience. Cookie information is stored in your browser and performs functions such as recognition when you return to our site and they also help us to understand which parts of the website are most interesting and useful to you. You can customize all cookie settings by moving the slider on the left side.

An urgently needed cookie is always enabled, so that we can store settings for basic cookie settings.

If you disable this cookie, we will not be able to save your preferences. This means that every time you visit this website you will need to enable or disable cookies again.

The General Data Protection Regulation (GDPR) is a European regulation to strengthen and standardize the data protection of EU citizens. We have also adapted our Privacy Policy for this purpose

The website (Rogaška Resort) resp. the company (SLKI d.o.o.) is committed to doing business that meets the requirements of the GDPR and all related laws regarding personal data protection.